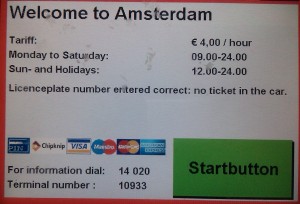 While the city of Amsterdam is one of the most expensive cities in the world to park in, the money the city has collected surely never went to hiring one lousy translator to handle their English-language parking machines. Nope, they did it themselves and failed.

Hm, where to start? I picked three things, but there are more.
– Tariff = rate.
It’s not about importing bananas, it’s about the price of something.
– Sun- and Holidays.
No, no, no you cannot cut a word in half like that in English. Ever!
– Correct = correctly. English adverbs have different spelling. And their sentence is a big missing link. If you’ve entered your licence plate (two words!) number correctly, you can’t possibly have a ticket in your car until the machine prints one out and you go and place it ‘good readable behind your windscreen’.

Seriously Amsterdam, city of so many tourists, shame on you for this shite translation. Nobody tell me the city is saving money because they bleed car owners dry.

UPDATE: If you enter your licence plate number you don’t need a ticket in your car because often you do. That’s what this machine is trying to say.

This entry was posted on Tuesday, January 10th, 2012 at 6:45 am and is filed under Recent. You can follow any responses to this entry through the RSS 2.0 feed. Both comments and pings are currently closed.