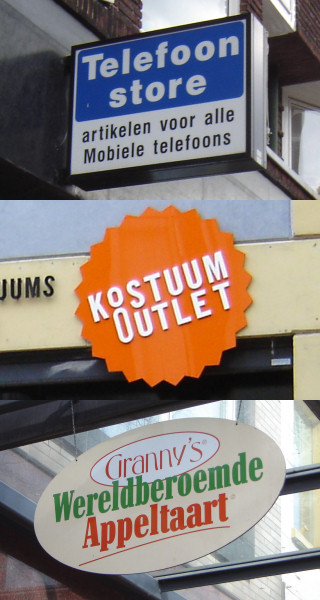 Although I’ve reached this conclusion for years along with many other people, I recently read that the use of English in the Netherlands is elitist. Addressing the Dutch market in English somehow makes advertising less national and more international, although in many cases, it would be better to go local (i.e. use local jargon, dialect and recognisable idiom) than turn it into Dunglish.

Another weird compromise between the local feel (Dutch) and the international feel (English) is the tendency to bastardize words, a linguistic mashup that can be funny and witty, but usually comes accross as trying to dumb things down by giving a glimpse of the international without wanting to alienate the intended audience. Many of my friends would take this moment to rant about the poor quality of Dutch education and blame Calvinism for ‘not being allowed to stand out from the crowd’ for fear that God will bust a big dyke somewhere.

A proper comparaison could be the way Americans use French or Italian to indicate something charming, romantic or sexy. The same words used in Canada could work in Italian, but not in French since it is much more normal to see things in French there. The use of Spanish in the southern United States already has a totally different connotation than it would in, say, my triptych of choice, Amsterdam, Brussels or Paris.

If the bottom line goal is to get attention, this is the linguistic version of the too short t-shirt that shows your belly button: you do see more skin, but 90% it’s a muffin top.

This entry was posted on Friday, March 7th, 2008 at 10:57 am and is filed under Recent. You can follow any responses to this entry through the RSS 2.0 feed. Both comments and pings are currently closed.