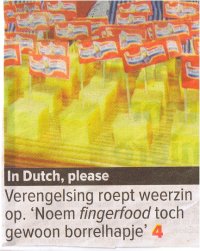 I couldn’t leave this one alone, especially since I had a three hour and thirty minute train ride, and needed a break from my sudoku puzzle. If you read the actual Dutch article, you’ll see that the author has a problem with “beachbites” because it apparently gives the beach cafe in question a good reason to jack up the price of ordinary Dutch fingerfood. I couldn’t agree more. I also agree with the author when he says that it is logical that English be used instead of Dutch in the business world, since I am in that world and things are just much easier for everyone in English most of the time.

Just look at the article to see Aqua Leisure & Host be mentioned as news (late, but OK).

Language is not only threatened from outside, but from within as well – the “beachbites” are a perfect example of this. The Dutch people who came up with that believed that English was better than Dutch, as it will be perceived as more interesting and even of higher quality. The end product is Dutch though, so, yeah, weird.

I for one didn’t spend all these years learning Dutch to go and dumb it down with nonsense.

This entry was posted on Friday, November 16th, 2007 at 12:56 pm and is filed under Recent. You can follow any responses to this entry through the RSS 2.0 feed. Both comments and pings are currently closed.