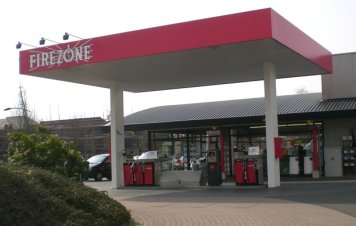 The story goes that Yoastie was driving through the wee town of Harfsen, Gelderland and felt that this petrol station had an odd name. Firezone is a brand name of Texaco, but then from what I can Google, only in the Netherlands. Their tagline is “quick, easy, safe and cheap”. They are mostly found in the North, with some odds and ends in other parts of the country, scattered like an explosion, really. The irony is of course that the last place to light up anything is at a petrol station.

This entry was posted on Thursday, April 12th, 2007 at 3:43 pm and is filed under Recent. You can follow any responses to this entry through the RSS 2.0 feed. Both comments and pings are currently closed.

3 Responses to “Don’t smoke at Firezone”