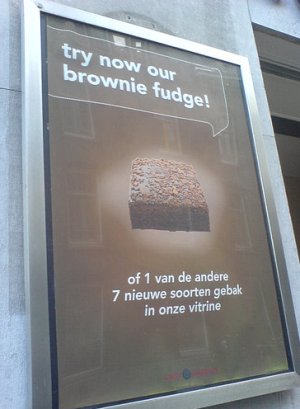 This lovely find is from the Coffee Company in Amsterdam, a Dutch business that is thriving in part thanks to their English name, according to the owner in a television interview. What wrong here? It’s a literal translation from the Dutch ‘Probeer nu onze brownie fudge’, which is also wrong apparently, as it should be ‘fudge brownie’. (True, I never had one, but I did make chocolate chip cookies yesterday, which has no bearing on this post whatsoever).

Brownies have been gaining in popularity as a foreign treat just like chocolate chip cookies (there they are again!), muffins and bagels, which means using English to describe them. And again, I’m surprised that such a successful company can’t be bothered producing proper English having claimed that they do well with tourists in Amsterdam because of their English name.

This entry was posted on Saturday, December 23rd, 2006 at 10:21 am and is filed under Recent. You can follow any responses to this entry through the RSS 2.0 feed. Both comments and pings are currently closed.