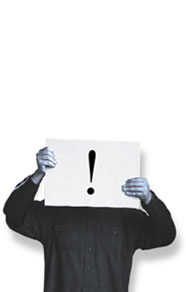 There is a Dutch quiz show called Question sign instead of Question mark.

Postbus 51 is a girl. It won a usability award, but apparently text eventually became unimportant:

“Less than a year later, it launched it’s first website, with an email information service. The site was completely restyled in 2002. In 2002 Postbus 51 won the Usability award assigned by 2C Communication Technology. Now three years later Postbus 51 has improved her website.”

And then a nice, intellectual bit about new words:

“Today, the influence of English is so strong that it has resulted in the creation of new words that look English, but do not really exist in that language. An example is the word mainport for a major international airfield. (The correct English word is hub.) Sometimes, the spelling of words is changed (e.g., the Nijenrode University now calls itself Nyenrode), and even the word order is changing. The word echter (however) used to be placed at the beginning of a sentence, but is now often placed after the subject, as in ‘Varieties, however, abound.’ It is interesting to note that the captains of industry, who in the 1920’s introduced English expressions to impress others, have in the 1990’s reverted to a studied purism, including, once again, the difference between masculine and feminine words. Everyone uses those English expressions now, after all.”

This entry was posted on Thursday, November 2nd, 2006 at 1:42 pm and is filed under Recent. You can follow any responses to this entry through the RSS 2.0 feed. Both comments and pings are currently closed.

10 Responses to “New and improved”