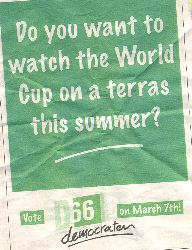 Here is a little bit of Dunglish to brighten up municipal election day in the Netherlands. It was the first time I got to vote, as non-Dutch citizens are allowed to vote in these elections. D66 stills sounds like the ingredient of an XTC pill to me. I can’t be bothered to look up their party origins and I saw enough of their lame ass adverts on telly. I do admire their sloppy attempt at getting the ‘expat’ vote. Worst of all, I don’t get the joke. Will they make a deal with God and order good weather? Will they fit all bars with nice tellies? Supply the beer and crips? What? No comprendo, voted for other folks. So ‘terras’ that, D66.

This entry was posted on Tuesday, March 7th, 2006 at 7:42 pm and is filed under Recent. You can follow any responses to this entry through the RSS 2.0 feed. Both comments and pings are currently closed.

2 Responses to “Sunny days ahead”