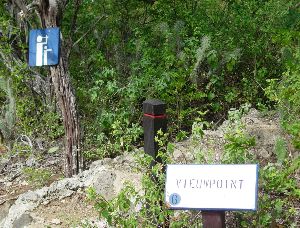 This small bit of colonial Dunglish comes from the sunny island of Curaçao, part of the Kingdom of the Netherlands, although there is speculation about it becoming its own country. They officially use Dutch and speak Papiamento, Spanish and English. It makes sense to get words mixed up with so many languages, but in any country, it is surprising to see mistakes on ‘official’ signs. That said, I still have to look at a Dutch sign near my place in Amsterdam that says “moter af” instead of “motor af” (turn off your motor) near a canal bridge.

This entry was posted on Friday, February 10th, 2006 at 9:12 am and is filed under Recent. You can follow any responses to this entry through the RSS 2.0 feed. Both comments and pings are currently closed.