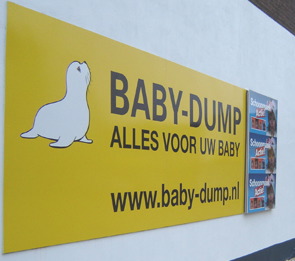 The word ‘dump’ in Dutch is normally used for an ‘army and navy surplus store’ (can someone explain to me why its ‘legerdump’ in one word and ‘baby-dump’ with a hyphen? Thanks!), but its meaning here has been stretched. You could argue that the only kind of dump is an army and navy surplus store and that this store is really an outlet store, even though they apparently have 11 stores. That’s a lot of surplus.

Can ‘dump’ be used to designate anything else than army and navy stuff? The Dutch Van Dale dictionary says ‘no’. The English word ‘dump’ also means “a place (goods or stock, for example) on the market in large quantities and at a low price.” But that’s English etymology, not Dutch etymology. And English etymology cannot apply to a Dutch word, as words enter different languages in different ways. This seems to be twisting the Dutch language to suit one’s baby needs, resulting in what looks like Dunglish. It’s also good for a laugh and has shocked many native English speakers.

This entry was posted on Saturday, January 21st, 2006 at 1:23 pm and is filed under Recent. You can follow any responses to this entry through the RSS 2.0 feed. Both comments and pings are currently closed.