Slip of the slip 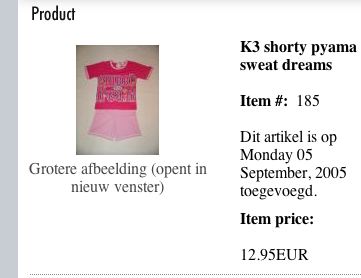 Let’s learn about Dutch culture or let’s check what I’ve learnt. I heard Dutch comedian Howard Komproe said on telly once that one of the main ingredients of Dutch comedy was taking pleasure in other people’s misery, called ‘leedvermaak’ in Dutch. And then, there’s this Flemish girl group called K3 that is one of the biggest selling Dutch-language groups ever, known for their merchandising. And last but not least, there’s a big difference between ‘sweet’ and ‘sweat’. ‘Sweat dreams’ is not child-friendly, but it is funny. And then there’s judging a website by its PHP, requiring that you code switch while shopping.

This entry was posted on Tuesday, January 17th, 2006 at 5:24 pm and is filed under Recent. You can follow any responses to this entry through the RSS 2.0 feed. Both comments and pings are currently closed.

6 Responses to “Slip of the slip”