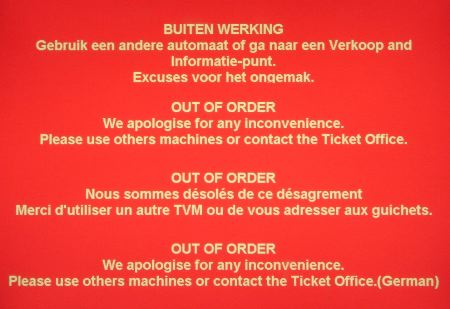 I know it’s not Dunglish per se, but I couldn’t resist. I’d like to chalk this one up to a bureaucratic mentality, which basically means it’s not important enough to do something about it until someone dies. I’m surprised at such a display of information at an Amsterdam metro station. What’s with wanting to have it in English, French and German as well? How very Brussels. The ‘German’ version reminds me of a friend’s answering machine message that was entirely in French and then said ‘same thing in English’. I love the subtle use of ‘un TVM’ in French, which is lazy for ‘Ticket Vending Machine’ and not at all French. People, leave it in Dutch and English and we’ll figure it out.

This entry was posted on Wednesday, November 23rd, 2005 at 10:30 am and is filed under Recent. You can follow any responses to this entry through the RSS 2.0 feed. Both comments and pings are currently closed.

7 Responses to “Outside working order”