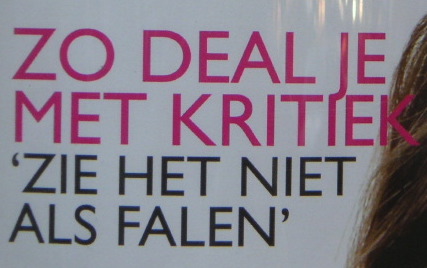 SIS, the name of this women’s magazine, refers to sisters, as in a group of women, but SIS is slang for one sister and in a waspy way at that. I once saw “You’re such a WASP!” on Sex and the City subtitled in Dutch as “Je bent zo Amerikaans!” (You’re so American!). Since WASP stands for White Anglo-Saxon Protestant, I would have made it “Je bent zo burgelijk!” (“You’re so bourgeois!”). After all, it was aimed at Charlotte.

‘Dealen’ in Dutch means to deal drugs! If a verb needs a preposition in Dutch, English is sometimes used to circumvent using one. That’s not the case here. Remember, sloth is one of the seven sins, folks.

This entry was posted on Thursday, November 3rd, 2005 at 10:40 am and is filed under Recent. You can follow any responses to this entry through the RSS 2.0 feed. Both comments and pings are currently closed.