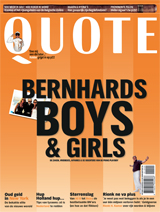 My message to Jort Kelder, the well-known, outspoken editor of the Dutch Quote magazine: this cover title is uncool. It’s a small bit of Dunglish, most probably done on purpose because ‘boys & girls’ is cooler than ‘jongens en meisjes’. ‘Bernards’, which means ‘Bernhard’s’ in Dutch, could have been left in English. I’m surprised Mr Kelder would sign off on a half measure.

Also, it is confusing to read because you do not know in which language you should read it. The magazine name is already in English, but imagine if an entire article was written this way! I say stick to what you know. That is what they teach in journalism.

This entry was posted on Monday, October 3rd, 2005 at 9:14 am and is filed under Recent. You can follow any responses to this entry through the RSS 2.0 feed. Both comments and pings are currently closed.

6 Responses to “Don’t quote me”