Maybe “toy” (it could be read “toij” by smaller children, as a “y” is often “ij” in Dutch) is more impressive than “speelgoed”, but “appelmoes” (apple compote) is still more appealing to children in Dutch. Frivolous = English, familiar = Dutch. Food for thought. 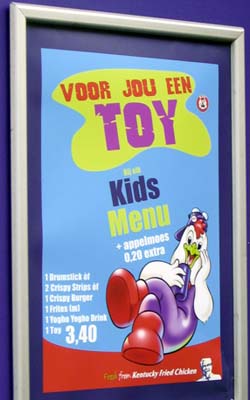 This entry was posted on Friday, April 8th, 2005 at 8:12 am and is filed under Recent. You can follow any responses to this entry through the RSS 2.0 feed. Both comments and pings are currently closed.

16 Responses to “Toying with kids”