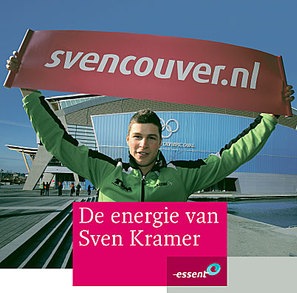 When I was watching Dutch speed skater Sven Kramer who was basically just waiting to ‘grab dem medals and run’ at the World Speed Skating Championships in Vancouver, Canada last weekend, there were adverts from Dutch utility Essent that read ‘Svencouver’. If you read it in Dutch, the ‘Sven’ rhymes with ‘Van’ because in Dutch the sound is the same. I actually liked it!

Essent wants to get customers to sign up with Essent under the name ‘Svencouver’ so they can get a discount depending on how many gold medals Kramer wins. Problem is, they’re not an official Olympic sponsor. The Dutch Olympic committee asked Essent to lose the good Dunglish because it sounds too much like Vancouver. And that’s apparently not good because Vancouver is supposed to be synonymous with the Olympics, the five coloured rings and all, but not Sven the human bullet.

Luckily for Essent, they also had a back up — ‘Svenergy’, which is now being used. In fact, Essent has no legal obligation to stop using ‘Svencouver’, but are literally being sports about it.

This entry was posted on Tuesday, March 17th, 2009 at 9:15 am and is filed under Recent. You can follow any responses to this entry through the RSS 2.0 feed. Both comments and pings are currently closed.