Back from Austria with Austrian Denglish 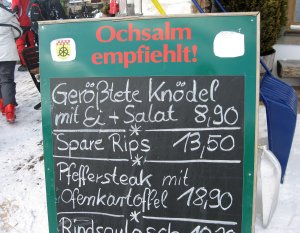 Just to recap, Denglish is German (Deutsch) mashed together with English, and since Austrians speak German (love the way it sings), they too can produce their own variety of Dunglish. In fact, the village I stay in had lots of Dutch signs with German endings, but we eventually understood what they meant. Something to do with skis.

I wouldn’t normally make a big deal out of such a typo, but since this was on the menu half way down the ski slope, I couldn’t leave it alone. The food was very good (I ordered the goulash). And nobody needs spare rips when booming down the piste.

This entry was posted on Tuesday, February 17th, 2009 at 9:38 am and is filed under Recent. You can follow any responses to this entry through the RSS 2.0 feed. Both comments and pings are currently closed.

4 Responses to “Back from Austria with Austrian Denglish”