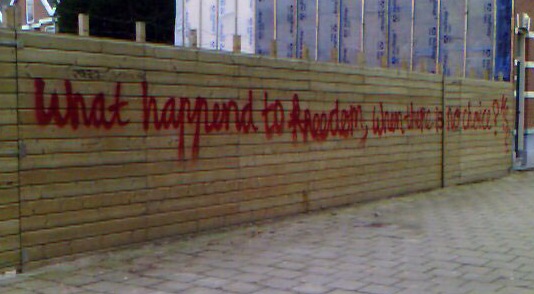 The graffiti reads “What happend (sic) to freedom, when there is no choice?” What, no choice of words or language? Not very deep, I’m afraid.

As Roel who sent this in put it, “I presume young people must have written this, but why were they using English anyway? Do they think itâ€™s cool? And have you noticed how often Dutch people mix up the tenses?” Well, I also noticed the punctuation. But of course, it’s cool. Dutch is soooo 2008 apparently!

And so the question remains: why use English if you can’t write it? I’ve seen mistakes in English graffiti in the Bronx, but that was just called ‘poor neighbourhood’.

Although a lot of people in Amsterdam like Laser 3.14 who scribbles on many walls, he messes up too.

This entry was posted on Saturday, January 17th, 2009 at 9:00 am and is filed under Recent. You can follow any responses to this entry through the RSS 2.0 feed. Both comments and pings are currently closed.