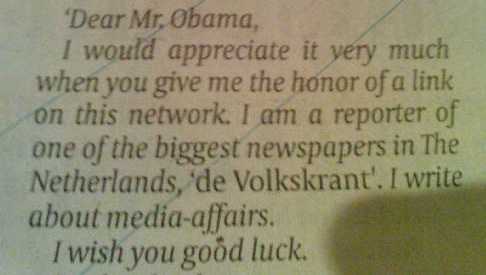 Maybe the journalist who wrote this wrote it really, really quickly and late at night. Maybe. But it’s still full frontal Dunglish in a big newspaper. This is part of an article in today’s De Volkskrant about the social media network LinkedIn. This message was what the journalist sent to try and get Barack Obama to link to him, which failed. So much for making a good impression. And I have Dutch friends who are linked to Mr. Obama.

A thumbs up for using American English (honor vs. honour). A big thumbs down for using “when” instead of “if”. The “media-affairs” is because in Dutch the wrong way it would be “mediaaffairs” and read like a headache. And so the proper Dutch spelling makes for improper English. It’s tough, I know.

I could go on, but I’ll let you have some too.

However, the article also quotes Dutch Prime Minister Jan Peter Balkenende’s profile and incidentally the nice mistake about where he works. It’s all about making a good impression. Maybe the Netherlands should be run more like a company!

This entry was posted on Thursday, January 15th, 2009 at 1:53 pm and is filed under Recent. You can follow any responses to this entry through the RSS 2.0 feed. Both comments and pings are currently closed.