Me no work right now go away 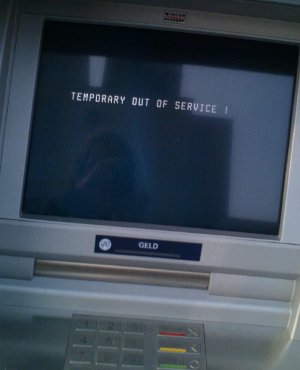 Yes, we know exactly what the poor ATM is trying to say and yes the ABN AMRO bank usually has a very colourful and well written four-language “this machine is out of order” message, which appeared later on that day. However, this must have been something special and so I caught just in time. For the record, it should be “temporarily” (adverb) and not “temporary” (adjective).

What surprises me is that this message appeared on an ATM in the district of Slotervaart in Amsterdam where about 60% of the residents are of foreign origin, many of which are quite old and either cannot read at all or do not function in Dutch, let alone English. The proof that there are senior citizens just around the corner is confirmed by an actual phone booth, most of which were removed throughout the country except in places with a high concentration of elderly people.

Of course, they get the message, so to speak, but I’m still surprised it was in some sort of English.

So for my Dutch friends who keep telling me they don’t know and myself, an adverb is a “bijwoord” and and adjective is a “bijvoeglijk naamwoord”.

This entry was posted on Monday, October 27th, 2008 at 8:57 am and is filed under Recent. You can follow any responses to this entry through the RSS 2.0 feed. Both comments and pings are currently closed.

9 Responses to “Me no work right now go away”