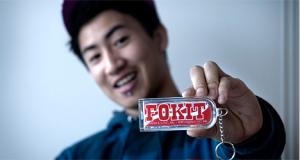 Yes, they mean ‘fuck it’, pronounced like a Dutch person, which sounds more like ‘fokit’. You could try and wince and read it as ‘fuck kit’, but that’s pushing it (pardon the pun). It’s terribly blunt and not even accurate, but not a bad idea, I have to admit. Business students of the Hogeschool Utrecht in Amersfoort came up with this in their first year to show off their business savvy.

Even if it is a success, even if that actually means outside the Netherlands, I strongly doubt it could be marketed under that name. And then I get the idea that boys and not girls came up with this and then the name is even more offensive to some.

It is, however, a nice example of young Dutch business sense: come up with some inexpensive, practical, but with a stupid Dunglish name everyone will love – until you try and market it across the border.

This entry was posted on Tuesday, May 20th, 2008 at 9:29 am and is filed under Recent. You can follow any responses to this entry through the RSS 2.0 feed. Both comments and pings are currently closed.