Explaining away Dunglish and getting tangled up 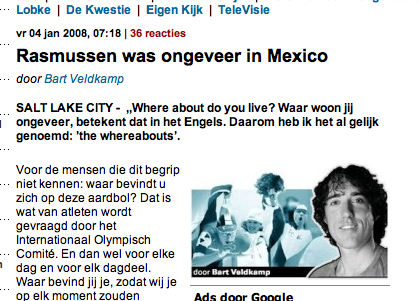 Many Dutch people make fun of the sensation seeking De Telegraaf newspaper because of the quality of its reporting, as compared to other Dutch newspapers. In an attempt to teach its audience something, this article tries to pass off Dunglish as proper English and makes a mess of it. I was so happy to read that Dutch people noticed it too. Journalists are supposed to check their facts and their references.

The mistake was simple “where abouts do you live?” and not “about”. Not a huge deal, but it should ideally be “where are you currently staying/residing?”. The article not only mucks up the English, but the comments also point out that the Dutch explanation is wrong as well.

And then it gets worse because “where abouts do you live?” does not mean the same thing as “where are you currently staying?”, which is the point the author tried to make in the first place. The author assumes that living and staying somewhere mean the same thing, which could even explain why Rasmussen might have got it wrong. And ‘to add more salt on the snail’ as they say in Dutch, the explanation of whereabouts is wrong as well.

This entry was posted on Friday, January 4th, 2008 at 12:56 pm and is filed under Recent. You can follow any responses to this entry through the RSS 2.0 feed. Both comments and pings are currently closed.

9 Responses to “Explaining away Dunglish and getting tangled up”