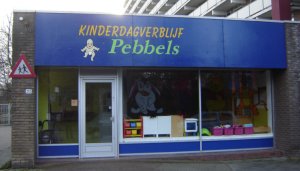 Bas, who sent this all in, is absolutely right: you could manage to come up with acceptable excuses for the first two photos, but not the last one.

‘Kits’ could be a play on bad Dutch pronunciation of ‘kids’ or refer to the Dutch word ‘kits’, found in the expression “Alles kits” (“Everything’s alright”).

The second one is a Duchtification of the name ‘Pebbles’, presumably of The Flintstones cartoons, which is just fine.

Number three (‘Het Toddler’s Huis’) doesn’t work because the English word is sandwiched between two Dutch words in turn bastardizing the Dutch spelling rules. Kids and bastards are not a good combo.

And then if you’re still not convinced, Bas also found a daycare centre in his hometown called ‘Heppie’, which is the Dutch pronunciation and Dunglish spelling of the word ‘happy’. To the English ear, it could sound more like ‘hippie’, but in any case, it’s Dunglish.

As I was explaining to people over drinks and after a few myself the other day, the Dutch language is threatened by its own people and an interpretation of their Anglo-Saxon media consumption.

This entry was posted on Sunday, December 2nd, 2007 at 2:50 pm and is filed under Recent. You can follow any responses to this entry through the RSS 2.0 feed. Both comments and pings are currently closed.

11 Responses to “Giving kids an unambiguous start in life”