Bits while waiting for my new camera 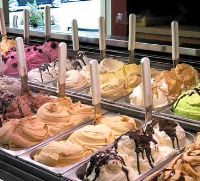 It’s too hot to think straight here in Amsterdam (34 degrees!). Here are bits of Dunglish I had lying around. Yes, you have to take my word for it, but then some guy published an entire book of things he supposedly heard just in time to push it as a Christmas gift.

“Chamber No.” on a B&D related website for ‘KvK-nummer’ (Chamber of Commerce registration number).

“I hope to have informed you sufficiently” at the end of a letter from a major Dutch bank. It goes where the ‘should you have any queries, etc.’ goes. It’s a classic.

“(name) is also throwing high eyes as a trance producer” (Thanks Remco!)
Have fun figuring it out, it took me a few minutes.

I also have a story for you.

When I first came to the Netherlands in 1999, I was ‘summoned’ as all newcomers are to take Dutch lessons. I couldn’t prove I was going to stay here for more than a year, so they said I couldn’t have lessons even though I wanted them. Omar with a Moroccan accent told me that.

Yesterday, two women of non-Dutch origin rang my doorbell and asked me if I wanted to take Dutch lessons. Half way through their question, they smiled and said, “oh, you probably don’t need them as I can see”. I hadn’t said a word. They assumed because I was white that I was Dutch. I asked them if they spoke Dutch. They stared and said “of course we do”. I smiled and said “so do I – and I’m from Canada”.

That’s enough out of me for now.

This entry was posted on Wednesday, July 19th, 2006 at 3:42 pm and is filed under Recent. You can follow any responses to this entry through the RSS 2.0 feed. Both comments and pings are currently closed.