Crumbs in the bed 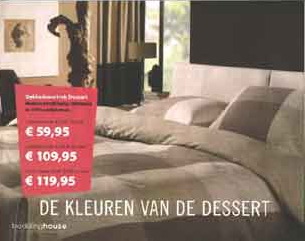 This was sent to me from the guys over at Taalpuristen, who felt there was something for Dunglish in this one. The advert literally says “the colours of the dessert (or pudding)”. Judging from the sandy colour, they meant to say ‘desert’. Problem is, ‘desert’ in Dutch is ‘woestijn’. There’s more wrong with this advert in Dutch, but I’ll leave that aside. It reminds of the French ‘poison du jour’ (poison of the day) instead of ‘poisson du jour’ (fish of the day), which is a common mistake and a great source of clean fun.

Speaking of clean fun, ‘dessert’ pronounced by a Dutch person with many ‘ssss’, reminds me of a silly party joke, involving sex after dinner. Funny or not, that party joke popped into my mind when I read this. One thing is for sure: the person who wrote this is mixed up.

This entry was posted on Monday, January 16th, 2006 at 12:26 pm and is filed under Recent. You can follow any responses to this entry through the RSS 2.0 feed. Both comments and pings are currently closed.

One Response to “Crumbs in the bed”