Saint Nicholas is coming to town 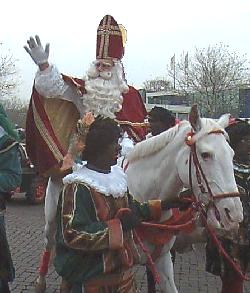 After two Dutch friends sent me a link originally suggested in a newsgroup by a third one, I decided to spread the joy eminating from the English translations of these four Dutch songs for Saint Nicholas. More popular and earlier than Christmas, these songs are played to death in shops and by loud street organs. I admit to not knowing a single one of them. The Dutch need to buy gifts for Christmas as well, throwing two separate parties, not to mention a third one for New Year’s Eve. No wonder Christmas is no big deal. For those who find Christmas too commercial, come on over here and enjoy the most sober Christmas you could ever imagine in a Christian country.

The songs are not very well translated, although that’s easy to say, considering how tough it is. I especially enjoyed the nasty typos. The bottom left “Zie de maan schijnt door de bomen” (roughly, “See the moon shine through the trees”) got beaten up as bad as the children fearing the rod in the song. You’ve gotta love those Christian values.

This entry was posted on Thursday, November 17th, 2005 at 9:59 pm and is filed under Recent. You can follow any responses to this entry through the RSS 2.0 feed. Both comments and pings are currently closed.

2 Responses to “Saint Nicholas is coming to town”