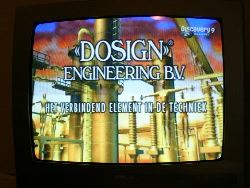 This Dunglish company name has been pointed out to me numerous times, and I even walked by their offices a few times. Then I noticed that they sponsored programmes on the Dutch Discovery channel. I think ‘Dosign’ is an odd Dunglish construction of ‘dozijn’ (dozen) with design. For us mere mortals, it’s an engineering firm. So far, many Dutch people think it’s a silly name. It also reminds me of an earlier posting about ‘diezijn’. The Netherlands is still a free country and people can call their company what they like, but someone has to pay for the botched up Dutch subtitles on the Discovery channel!

This entry was posted on Wednesday, October 5th, 2005 at 11:01 am and is filed under Recent. You can follow any responses to this entry through the RSS 2.0 feed. Both comments and pings are currently closed.