Think thirst and drink up

This advertising campaign was a flop. The goal was to point out the negative effects of drinking to young people, apparently justifying the use of English. If you translate it back into Dutch (meer drinken, minder denken), it’s also wrong. You could argue that it was meant sarcastically, but a second poster was made depicting a guy with a big scar on his face from fighting. What about drinking and driving, becoming an alcoholic, being sick, missing work, waking up in a strange bed? So much for taking youth issues seriously. 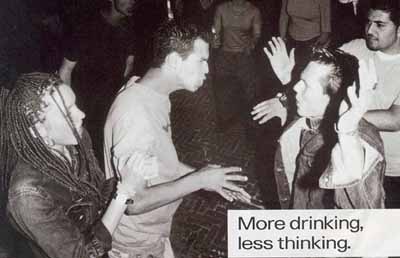 This entry was posted on Thursday, March 3rd, 2005 at 9:59 am and is filed under Classic. You can follow any responses to this entry through the RSS 2.0 feed. Both comments and pings are currently closed.

5 Responses to “Think thirst and drink up”